We invite you to join us for worship on Sunday mornings at 9:30 AM for worship in person and via Zoom or Facebook Live!

“Step Into the Swell”: Peter Sinks in the Water 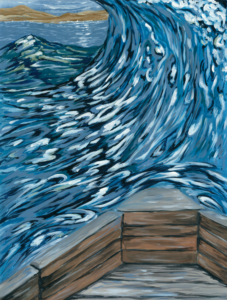 At the start of this chapter, John the Baptist is brutally beheaded. Jesus withdraws from the crowds to a deserted place, yet is followed by the masses—perhaps many of them former followers of John the Baptist. Moved with compassion, he heals the sick and miraculously generates bounty from a meal of five loaves and two fish. Then, he “immediately” rushes the disciples into a boat, dismisses the crowds, and retreats to a mountain by himself. Perhaps he needs space to grieve John and to grapple with the gravity of his calling. The crowds and demands of his ministry were surging; in the same way, the waves and the wind begin to  batter the boat that had drifted far from shore. If you’ve ever been in open water during a storm or even high winds, you know the shockwave of fear that pulses through your veins. Yet, as dawn breaks, a mirage beckons to them, casting out words to buoy them up: “Do not fear.” What I find in Peter’s response is not a challenge or a profession of doubt, but a willingness to step into the swell, like a trust fall into the unknown. Perhaps in seasons when our sense of certainty and security unravels, our desperation is more likely to convert into courage. Is there something about unraveling that makes us a bit less risk-averse, a bit more willing to try what we wouldn’thave dared when everything felt predictable  and sure? Imagine this same scene with no storm, no raging seas, no ghostly glimpse of Jesus skimming the surface. Would Peter have stepped in then? Would he have expanded his definition of what’s possible? Would he have xperienced the divine so surprisingly, so surely? Would you step in?