We invite you to join us for our Advent & Christmas Events! Click on the Worship link below for a listing of dates and times.

Unraveled Week 11 Artwork *May be disturbing to Children*

Unraveled Week 11 Artwork *May be disturbing to Children* 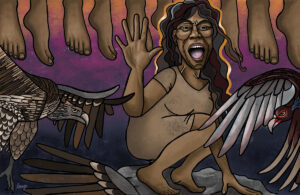 I don’t know what to say. This story leaves me without adequate ways to fully process the searing pain and utter wrecking of the life of this woman, Rizpah. She is a “low status” wife of Saul.

She is raped by a man who denies his actions. Her two sons are sentenced to death as a king fumbles to rectify wrongs that cause a famine in the land. She gathers her sackcloth and climbs the mountain of God to defend the bodies of her children and their half-brothers. She spends day and night for up to six months fighting off birds of prey and animals of the night from ripping apart the bodies of her children and what shred of hope she has left.

David hears of her passionate, radical, public grief and is moved to delayed justice. He calls for the burial of Saul and Jonathan, but also sees to the proper burial of the seven sons that he carelessly offered up to appease God. Justice in this scenario looks like sheltered, buried, dry bones. Rizpah’s public unraveling causes the unraveling of David’s distorted version of justice. God doesn’t require a human sacrifice for the end of the bloodguilt. God ends the famine when David listens to the voice of this strong, fierce, unraveling woman. I pray that we learn from Rizpah. When we see injustice may we, like Rizpah, climb the mountain of God and defend those who cannot defend themselves. When we see someone unraveling in inexplicable grief, may this sight unravel us from the ways we are entangled with injustice.