We invite you to join us for worship on Sunday mornings at 9:30 AM for worship in person and via Zoom or Facebook Live!

RESTORED
(THE CONVERSION OF SAUL)
By Lisle Gwinn Garrity
Inspired by Acts 9:1-20 | Charcoal & ink on paper 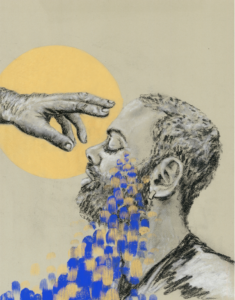 Saul doesn’t just persecute Jesus’ followers, he breathes threats and murder. His hatred fumes out of him like fire, perhaps a fire tended by fear—fear that his Jewish tradition will become impure or distorted, fear that the walls he’s built around who’s in and out will crumble, fear that his own hard-earned piety will diminish. He’s a force of terror, sculpted by self-sufficiency and self-righteousness. He’s a religious extremist not so unlike the ones we know of today.

Until God smacks him down, pulling his sight and self-reliance out from under him like a rug. God softens Saul’s steely heart by forcing him to confront those whom he harms, and by making him utterly dependent on relationship and others to survive. Perhaps Saul’s conversion is ultimately a radical healing—God soothes his fear and hatred with empathy and intimacy.

But this isn’t just a story about Saul’s transformation. His companions on the road to Damascus are changed too, as they hear the voice of the risen Christ and escort a stumbling Saul to the city. Ananias’ conversion is the most courageous of them all. He risks everything, including his own life, to come close to one with the power to have him stoned. Only in the moments when Ananias’ fingers touch Saul’s eyes, does Saul see, for the first time, the image of the divine in one who is not his enemy, but his brother.

In this image, a halo hovers around the hand of Ananias, nodding to the sacred courage required to melt the hatred of his oppressor with intimacy and connection. Scales pour out of Saul’s eyes, purging him, cleansing him, igniting him with a new and particular mission: to pour out God’s grace wherever humans try to limit it.